In the year of 1997, top management of Dnipropetrovsk National University, – taking into account the objective conditions of multiculturalism of our country and taking into account the recently increased interest to politicians, scientists, sociologists, historians, ethno-political nature specialists of the issues in the world, as well as considering the historical experience of the past which can contribute to development of investment policy of foreign countries towards Ukraine, formation of the image of Ukraine as a legal state – made the decision to create the Department of World History Faculty of the Institute of Ukrainian-German research. In 2009 the Institute was renamed into the Center of Ukrainian-German research. The supervisor of the Center is the candidate of historical sciences, professor Svitlana Bobyleva.

Research Program of the Center stipulates meeting of all requirements of Ministry of Education and Science of Ukraine. It takes into account the need to analyze migration taking place for centuries in Europe, enhance the European integration process that at this stage has put on the agenda the problem of behavior of diaspora groups in innovative surroundings. 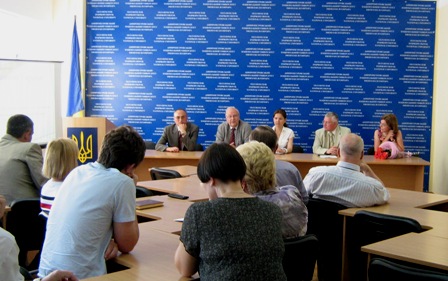 The main areas of research:
- The influence of Western Protestantism in religious life in Ukraine (XVIII-XX centuries).
- Role of mennonite industry in socio-economic development of the nineteenth and early twentieth century;
- Socio-economic and political processes in the German Mennonite communities and their relationship with the national processes, asynchronization and synchronization of different events; media impact of Western culture on the economic development of individual regions, cultures and mutual interaction, positive and negative aspects of this phenomenon;
- History of the German population of the revolutionary period, the NEP and the time of colonization;
- Problems of the German population in Ukraine during the Second World War;
- The study of the history of a significant number of German and Mennonite colonies on the basis of archival materials of Ukraine, Russia, Germany and Canada.

The Center has signed a number of cooperation agreements:
- Agreement on cooperation with the Institute of German History and culture of the North-Eastern Europe (1998 - present) (Loniburg, Germany);
- International Memorandum with Colorado State University (2012 - present) (Fort Collins, USA);
- Memorandum of Understanding with the German Historical Institute in Moscow (Moscow, Russia).

Center staff has permanent scientific contacts with German, Canadian, American, Swedish, Russian scientists, innovations, exchange of scientific literature. The result of a creative cooperation was the preparation and publication of important scientific papers: Encyclopedia "Germans of Russia" in 4 volumes (1999-2006); Pilot project "Germans of Ukraine" (2002); "Germans and Mennonites History of South Ukraine 18th–19th century" (1999); Textbook "History of Germany from ancient times to 1945"; "Live and Remember Mennonite colonies in Katerynoslav History" (2006); "Gospel activity in the Russian Empire (1850-1917): Katerynoslav province" (2006); "Mennonite entrepreneurship in the time of modernization of South Russia: Between congregation, Russo clan and society (1789-1920)" (2009); "Bibliography of works on the history Germans, published in Ukraine for the years of independence (1991-2012) (2015); annually published collection of scientific papers "Issues of German History," the editorial board comprising leading scientists of Ukraine, Russia, Germany, Belarus and the United States. 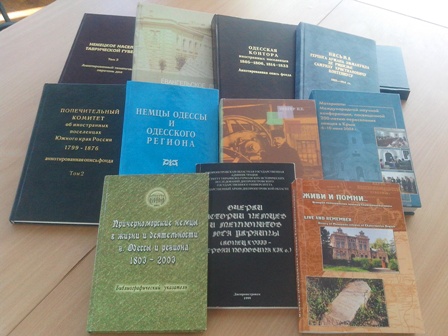 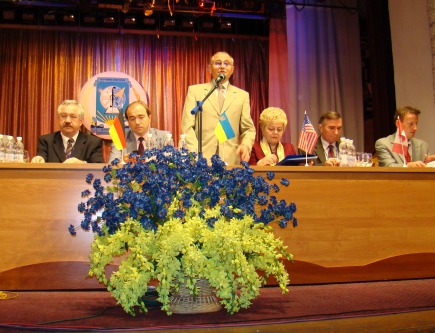 New impetus received contacts with the International Centre of Menno Simons (Netherlands). Thus, on April 17, 2012 at the Center of Ukrainian-German research of DNU we carried out a meeting with its representatives Kis Knaynenberg and Antoinette Heyzevoet, during which we have drawn up the ideas to establish an international website on the history of Mennonites. Employees of the Centre were asked to take part in the project "Mennonite Welcome to Europe".

A certain stage of recognition of productive work of the Ukrainian-German Center for Research in DNU was the meeting of the DNU top management, Dean of the Faculty of History professor S.I. Svitlenko, members of the Centre with Ambassador of the Netherlands to Ukraine Mr. Peter Ian Walters on July 14, 2012. The Ambassador informed about the diverse activities of the Centre, he got acquainted with the research on the history of the Mennonite community in Ukraine.

Since 1998 the Center carried out scientific research work.

In the 2015-2016 the Centre staff work over the research project "National Minorities of the West in terms of social transformations of the Ukrainian Soviet Socialist Republic of the second half of the XIX and the first half of the XX century." The project aims to study and ascertain the nature and characteristics of the main stages of socially political transformation of national minorities living in the South West Ukraine in the late nineteenth and the first half of the twentieth century.