Center Supervisor – dean of the Faculty of Ukrainian and Foreign Philology and Study of Arts, professor I.S.Popova.

On September 30, 2010 in Dnipropetrovsk National University we have created a new structural subdivision – Center for Portuguese Language. Center is based at the Faculty of Ukrainian and Foreign Philology and Study of Arts (FUFPSA) at the chair of Roman Philology. For the successful operation of the Centre we equipped room № 1011, provided all necessary materials and Portuguese library.

To ensure coordination of activity in completion of tasks, we created the Coordination Council of the Centre, which includes the rector of DNU M.V.Polyakov (Chairman of the Board); Vice-rector for scientific and pedagogical work in international cooperation M.P.Dyachenko, Dean of FUFPSA I.S.Popova, head of Chair of Roman Philology I.S.Kirkovska. The main objective of the Centre is to create conditions for further development of Ukraine's relations with Portuguese-speaking countries in the field of education, science and culture and under the phenomenon of increasing the authority of Ukrainian higher education in the world. Work Center facilitates direct contacts with universities in Brazil and Portugal, organizing and conducting joint scientific conferences, symposia, seminars, research on language, literature and culture of both countries.
Center Activities

II. The result of the organizational work of the Center of Portuguese Language is the organization and carrying out of cultural events and meetings with native Portuguese citizens and Portuguese experts in culture, which positively affects students, expand their cultural awareness and improve knowledge of the Portuguese language.
- February 23, 2010 meeting of F.Sukhonis, chief editor of Borysten magazine, with students of DNU to present the book "Rio de Ukraine";
- February 21, 2011 creative meeting "Centre for Portuguese Language invites the guests" with native Portuguese language carriers, namely students from Angola, there were also invited students of the Dnipropetrovsk school of culture;
- April 21, 2011 art event "Welcome to the world Lusophony" devoted to Brazil's National Holiday – Tiradentes;
- May 12, 2011 meeting of students of DNU with honorary guests of the city – famous Brazilian poet with Ukrainian origin Vira Vovk and artist Zoya Lisovska. Dear guests were accompanied by F.Sukhonis, modern Ukrainian writer, chief editor of magazine "Borysten". 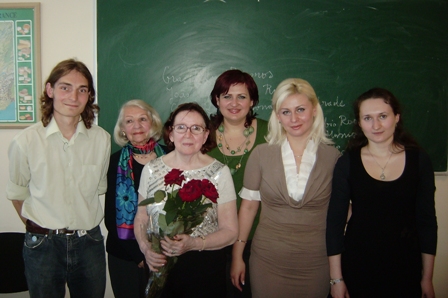 
- November 19, 2011 Laboratory Studies at the Department of Roman Philology at DNU within Speaking club "Meetings with France" and the Center for Portuguese Language; event "Linguistic trip around roman-speaking European countries" with participation of 70 pupils of Dnepropetrovsk. The purpose of the meeting was to help in targeting pupils in choosing future profession and familiarization with the activities of the Department of Roman Philology. During this meeting, students were able to get their first lesson of the Portuguese language.
- November 14, 2013 meeting with the Ambassador of Federative Republic Brazil to Ukraine Antonio Fernando Cruz de Melo. During the meeting the following issues were discussed: Presentation of the program of Brazilian Government "Science without Borders", which would provide 3,000 scholarships for Ukrainian students of different specialties; supply of Center for Portuguese language with teaching literature; arrival of Brazilian intern to work with Ukrainian students.
- October 18, 2014 Dnipropetrovsk hosted festival of Brazilian cinema and culture, which was attended by teachers of the Department of Roman Philology. The opening of the festival was attended by the Ambassador of Brazil Antonio Fernando Cruz de Melo and Honorary Consul of Brazil in Dnepropetrovsk.

The Centre activity was also marked in city design contest (2011) "The youth of Dnepropetrovsk – to the native city" project with educational and methodical manual "Specialized Portuguese language for professionals in the field of space technologies".

III. The result of scientific research of the Center was participation in the International scientific conference «II International Colloquium of Slavic Studies», University Unisentro (Brazil, Parana state, city Irati) from 10.03.12 till 20.03.12. Lecturer in Roman Philology of DNU. Topic: "Saving the linguistic identity of the Ukrainian Diaspora of Brazil as a factor in the formation of a new stage of relations between Dnipropetrovsk National University and the State University of Parana Unisentro".

On 21.05.2012 - 22.05.2012 DNU hosted Dr. Anselmo Sherner, professor of history of Unisentro university, campus Irati (Parana State, Brazil). The purpose of the visit of this scientist from Brazil was the development of international educational relations between the faculty of foreign languages and philological faculty Unisentro (Brazil) as well as conversational practice and improving of knowledge of geography for Brazilian students of 1-4 years at the faculty of foreign languages who study Portuguese language as a third foreign language.

Dr. Anselmo Sherner presented report «NEES and LAPEF: role of scientific centers and laboratories in research of Ukrainian question in Parana" at the informal meeting with professors and students of the Faculty of History and Faculty of Foreign Languages. The meeting discussed issues related to the mobility of teachers and students; discussed the possibility of joint research, seminars, conferences and publications in journals of both universities. 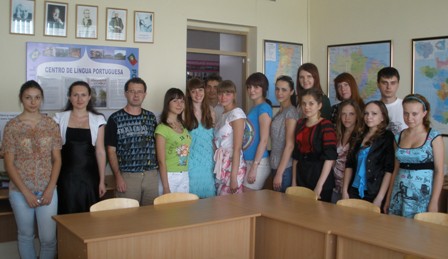 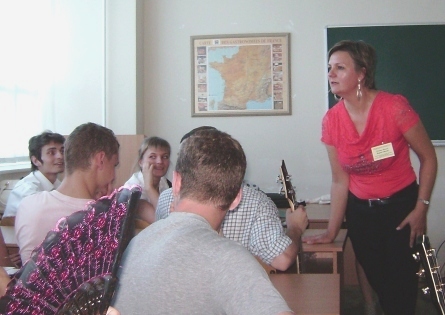 
1. Participation of chairs at the Faculty of Ukrainian and Foreign Philology and Study of Arts in the creation of the specialty "Ukrainian Language and Literature" for Brazilian students.

Another step in the development of bilateral relations between faculty of Ukrainian and foreign philology and art and Parana diaspora faculty was the participation in the project "Education without Borders". Brazilian students are welcome to obtain postgraduate education offered in DNU at the Faculty of Ukrainian and foreign philology and art history in the specialty "Ukrainian language and literature". Training of students who have a first degree of higher education may relate to the degree of "Bachelor" and "Master" during the year (two semesters). Training of scholars can be carried out on the basis of training specialized departments – Ukrainian Language and Ukrainian Literature and at the Department of Roman Philology, which will be the basis of passing on cultural and educational practices. The faculty has collected a set of preparatory documents in Ukrainian and English (program of training and program of courses).

2. The new concept for the development of Center for Portuguese language.