Faculty of Ukrainian and Foreign Philology and Study of Art 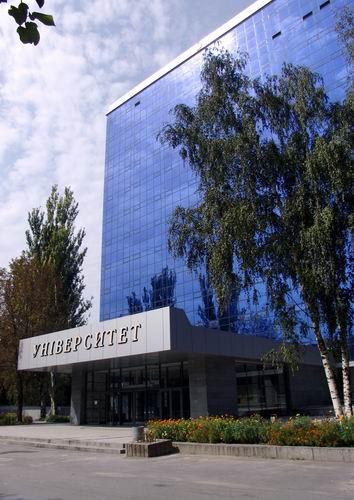 Katerynoslavs’kyi university opened on the basis of higher women courses in September 1918 in Katerynoslav. 4 faculties were included into it: historical-philological, juridical, medical, physical-mathematical. M.K. Liubavs’kyi was the first dean of the historical-philological faculty.
Famous scientists work at the faculty in 1918-1922. Prof. D.I. Yavornyts’kyi (1855-1940) is the head of the science of Ukraine chair; he gives lectures on the history of Ukraine, archeology, philology. During 1920-1921 he was the dean of the faculty. He wrote detailed works in those years: “History of Zaporozhskaya Sech”, “Dniprovs’k Rapids” and others. From 1918 till 1921 a famous linguist and teacher professor O.M. Pieshkovs’kyi (1878-1933) worked at the faculty, he is the author of fundamental work “Russian Syntax in Scientific Light”. He is the head of the comparative philology chair these years. Professor M.Ya. Nemyrovs’kyi (1883-1965) is the head of the philology and methodology of literature history chair from 1921 till 1922.
The faculty has the name historical-philological in 1944-1971. Roman-German department was opened at this faculty of Dnipropetrovs’k university in 1962, and the faculty became philological in 1972. Journalistic department was opened at the faculty in 1990; Chinese department was opened in 1993. Faculty of Ukrainian philology and study of art left the philological faculty, and in 1996 the same did a journalistic faculty. The specialty “Fine arts and arts and crafts” was opened at the faculty of Ukrainian philology in 1995, in 1998 – a specialty “Design”. The training of the specialists was started at the philological faculty of “The Japanese Language” specialty in 1997, and the specialty “Translation” was opened in 2004. A faculty of Ukrainian and foreign philology and study of art was created on the basis of philological faculty and faculty of Ukrainian philology and study of art of DNU in December 2005.
15 doctors of philological science, professors, 77 candidates of philological science, docents, 50 senior teachers, 51 teachers, 7 scientific workers work at the faculty.
1507 students study at all specialties at the faculty. Famous graduates of the faculty: writers Oles’ Honchar, Pavlo Zahrebel’nyi; poets Serhii Burlakov, Viktor Korzh, Natalka Nikulina, Ivan Sokul’s’kyi, Liubov Holota, Anatolii schkliar; professors: V. Mykytas’, Ye.S. Otin, M.M. Bulhakov, O.M. Schylovs’kyi, V.M. Turkin, O.O. Taranenko, N.M. Solohub, M.A. Zhovtobriukh, K.P. Frolova, D.Kh. Barannyk, V.O. Horpynych, V.S. Vaschenko, O.S. Lins’kyi, O.M. Trubachov and others.

Structure of the Faculty Leaders

Structural Subsections of the Faculty

The faculty cooperates with Ukrainian and foreign higher educational establishments: Kyiv national university named after T.H. Shevchenko, Kharkiv state design academy, Lublin university named after M. Kiuri-Sklodovs’ka (Lublin city, Poland), students have periods of probation in higher educational establishments of France ( lyceum of Moris Ravel’, Nant city), China, Japan, Swede (Fol’kuniversity), USA (Minnesota University, Minneapolis city), European university (Budapest city, Hungary), Richmond University (Virginia state, USA).
The most active connections with scientists of the University named after M. Kiuri-Sklodovs’ka has fine arts and design chair. During 2006-2007 three groups of students and teachers of this chair took part in the plenary sessions in Poland. The teacher V. Korsuns’kyi got the proposal to do 6-8-month work to write a candidate dissertation in 2006. A delegation of the University named after M. Kiuri-Sklodovs’ka presented in DNU an exhibition of Poland poster in January 2007 which was made by the students of this educational establishment.
A general and Russian linguistics chair takes part in international program realization (“The program of new generation of textbooks creation dealing with the Russian language and literature for CIS countries”), provided by philological faculty of Saint-Petersburg state university; in the limits of an agreement about scientific cooperation the chair cooperates with general linguistics chair of Sievierodvins’kyi branch of HOU VPO “Pomors’kyi state university named after M.V. Lomonosov” (Russia).
A docent of the chair O.O. Polovynko taught the Russian language as a foreign one according to the agreement about cooperation between DNU and Shandun University in Veifan city (CNR) in 2007/08 educational years. A teacher of the Polish language M. Rutkovs’ka works at the chair in the limits of intergovernmental agreement between Ukraine and Poland.
The chair is the center of the Russian language and literature teachers of Ukrainian association (Ukraine) (RLLTUA), which is the part of International association of the Russian language and literature teachers.
The chair trains foreign students and post-graduate students the Russian language as a special one and the Russian language as the second foreign language, trains ethnic students from different higher educational establishments at the specialty “Language and literature (Russian)”. A student Clair Ansel from Canada studied at the specialty “Language and literature (Russian)” at the individual schedule in 2007/08.
The translation and linguistic training of the foreigners chair cooperates with Gdansk University (Poland) and Sukhum University (Abkhazia), trains specialists with the Russian and Ukrainian language knowledge for different countries.
Russian philology chair has scientific connections with higher educational establishments of France and Russia: with the University of Nant city, Moscow state university named after M.V. Lomonosov, Belgorod state university.
The second important direction of the international activities of the university is an annual direction of students to study at the foreign countries universities. A high scientific and pedagogical potential of the comparative philology of Eastern and English speaking countries chair teachers allows to provide comprehensive training of the students in the sphere of the Eastern languages and literatures. As a result the teachers and students study in CNR, Japan, Turkey in the limits of state agreement about cooperation among countries which provides a high level of the specialists training of Ukrainian students in state educational establishments of these countries. Moreover, the government of Chinese national republic sends the best professors of leading higher educational establishments of CNR every year according to the state agreement to teach the Chinese language and special philological disciples at the Chinese philology department.

Students’ self-government functions at the faculty not first year. A paramount task of the Council of the faculty students is to protect the rights and responsibilities of students, to improve and to make different the students’ life, to open a creative potential of the young people.
The teachers and scientists of the faculty created a Regional center of the Ukrainian language history and development, where students’ scientific association “Philologist” functions. The deepening of the knowledge, working out the skills of scientific researches is an urgent direction of students’ association activity. An annual collection of students’ scientific publications “The young people are eager to comprehend the word” was founded.
A French speaking students’ theatre and speaking club was founded at the Roman philology chair in 1995.
The students of the Ukrainian and foreign philology and art-criticism faculty were always the creative personalities. Evidences of it is the conduction of the days of the first-year student, author’s song contests, New Year carnivals “Masks disappear in midnight”, CFI – the contests among faculties, “Miss faculty” contests and others. But not only contests and entertainments define the students’ life of the faculty. The Council of the students organizes visits to children’s homes with festival concerts and gifts during some years.
The meeting with creators became traditional at the faculty: Irena Rozdobud’ko, Larisa Denysenko, Lesia Stepovychka, brothers Kapranov, Liubko Deresh, Yurii Andrushevych, Serhii Zhadan and others.
The students of the faculty conducted an action “Do not be indifferent, find out more about AIDS”.
Students take an active part in cultural life of the university: national circus studio “Raiduha”, national dance ensembles “Veselka”, theter studio “Hravtsi”. An ensemble of guitar players is organized at the faculty. It is a known activity of a theatre group “Vidlunnia”, besides its plays “Roksolana”, “Marusia Churai”, “Evening at the farmstead FUPandAC” and other. A young people’s chamber choir “Yunist’” is famous which is now 35 years old, the most active participants of it were the students of the faculty during this time. Second-year students of the English philology chair organized a studio of a modern dance “Sweets”, and first-year students organized a show-ballet “Dance sensation”.
A club of talented young people “Crocus” functions at the faculty. By the initiative of students, any person can become its member if he/she writes poetry or prose, is interested in recent publications.
Students take an active part in sport life of the university. Thus, Olexander Savchenko became a prize-winner of Dnipropetrovs’k region in track and field athletics, Iryna Lopatina became a champion of Ukraine in water polo. Students of the faculty became the members of the combined team in badminton, swimming, track and field athletics, and weight-lifting sport.