History of the University

The first attempt to establish the University in Katerynoslav (former name of Dnipro city) was made at the end of the XIX century, when a tsar’s decree was issued. But practically this idea was embodied only in August of 1918 owing to persevering efforts of domestic intellectuals and support of famous Ukrainian scientists V. Vernads’kyi, D. Bagalii, M. Vasylenko, L. Pysarzhevs’kyi, according to the application of whom the decision about opening of the University was adopted within the frames of four faculties: historical-philological, juridical, medical and physical-mathematical. 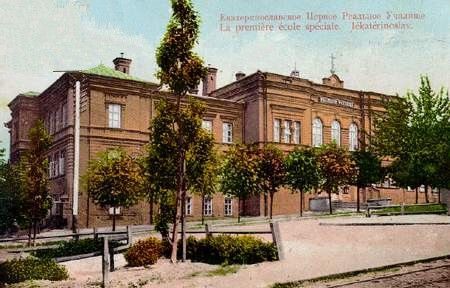 Therefore, in the autumn of 2008 the University has solemnly celebrated the ninetieth anniversary from the time of its foundation. The official status of the national educational establishment is given to the University by the decree of the president of Ukraine in 2000, and on the 25th of June, 2008 according to the decree of the Cabinet of Ministers of Ukraine N 884-p, the University is named after the famous Ukrainian writer, scientist, public figure – Oles Terentiovych Honchar.

The University is proud of the pleiad of the prominent scientists-academicians and the corresponding member of national academies of sciences of Ukraine, Russia and other countries, professors who have enriched the potential of native science, acquired national and international recognition with the help of their own original ideas and researches. They are such scientists as G.V. Kurdyumov, V.I. Danylov, I.Ye. Ogievets’kyi, S.M. Nikol’skyi, D.O. Svirenko, O.M. Dynnyk, L.V. Pysarzhevs’kyi, D.I. Yavornyts’kyi, V.S. Budnyk, T.F. Herasyuta, V.I. Mossakovs’kyi, O.L. Bel’gard, A.P. Travleyev, I.F. Koval’ova, V.P. Motornyi and many others.

Owing to the efforts of the leading scientists and all personnel of professors and teachers, well-known scientific schools in the sphere of mathematics, mechanics, radio physics and radio electronics, rocket-space technics, neurocybernetics, biotechnologies, inorganic chemistry, historiography and source study, history of Ukraine, archaeology, Germanic studies, study of literature and linguistics etc. were established and are successfully developing. Achievements of the University scientists are marked with numerous national and branch awards, prizes, grants of foreign scientific-educational establishments.

Altogether, over 120000 specialists graduated from the University during the time of its existence, without whom any sphere of our social life would be hardly imaginable. 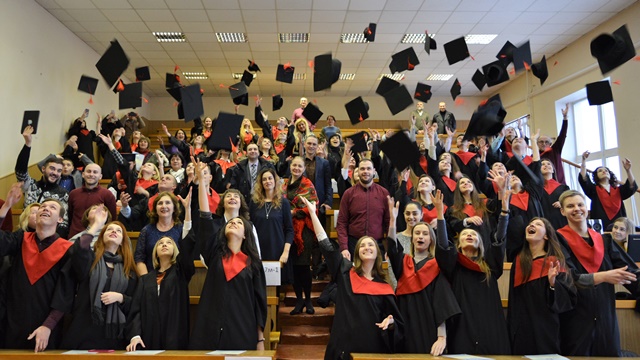 The graduates of Dnipro National University work in different spheres of the Ukrainian economy, countries of CIS. They are heads of state institutes, educational and scientific structures, production associations, cultural centers, and mass media. The most famous among them are L.D. Kuchma (President of Ukraine in 1994 – 2004), Prime Minister of Ukraine Yu.V. Tymoshenko, Heroes of Ukraine O.T. Honchar and P.A. Zahrebel’nyi, director general of National space agency of Ukraine, Hero of Ukraine Yu.S. Alikseyev, chief designer of SCB “Pivdenne”, Hero of Ukraine, academician of Ukrainian NAS S.M. Koniukhov, designers of the rocket-space systems Yu.P. Semenov, A.K. Nedaivoda, the Heroes of Ukraine V.A. Sichovyi and V.G. Komanov, an academician of Ukrainian NAS, a rector of Donets’kNational University, the Hero of Ukraine V.P. Shevchenko, academicians V.P. Gorbulin, P.P. Shyrshov (the Hero of Soviet Union), G.M. Savin, I.M. Khalatnykov, O.M. Trubachov, V.V. Pylypenko and many others.

The University today is a higher educational establishment of the VI level of accreditation multibranch educational-scientific complex where 20 faculties, a post-graduate course and an institution of doctoral candidacy, 3 scientific research including 150 doctors of science, professors and almost 700 candidates of science, docents. In the structure of the university are also higher educational pedagogical college, technical school of the rocket-space machine-building, Zhovti Vody industrial technical school), a preparatory department (including such department for foreigners), a Regional centre of the continuous study “Prydniprovia” (in the structure of the Centre are colleges and technical schools, lyceums, gymnasiums, schools, production associations), a Centre of humanitarian problems of education, Regional centre of the education monitoring and others. 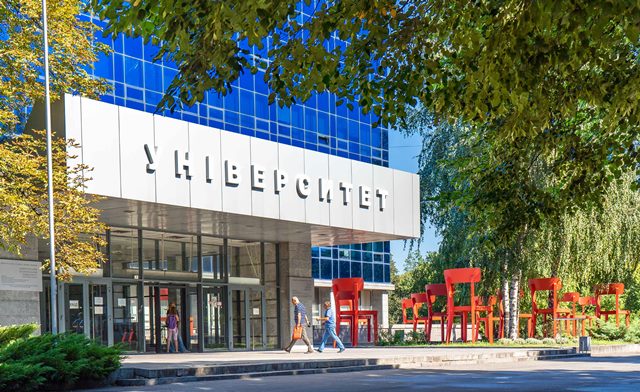 Over 15000 students study at the University at 87 specialties with licensed amount of the acceptance over 3000 people, and also foreign students and post-graduate students more than from 20 countries of the world. Educational-pedagogical and scientific process at the University is provided at the level of the best native and world standards.

A spectrum of scientific researches of Dnipro National University (DNU) as a classical university covers all seven priority directions of science and technics development of Ukraine. Scientific schools were formed, which are famous in Ukraine and through its limits, which have necessary peopleware and influential potential opportunities for the development.

Scientists of the University publish over 20 monographs every year, almost 2000 scientific manuals. Patent fund of the inventors counts almost 1600 patents and certificates of authorship and it is increasing by new inventions every year.

Almost 5000 students take part in different forms of scientific effort. They publish more than 600 articles every year; they also get numerous awards at different competitions, contests. 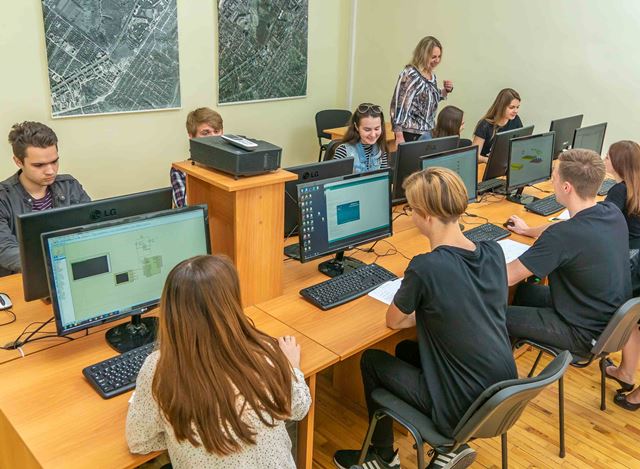 Dnipro National University develops an international cooperation in the context of almost 50 two-sided agreements with the leading foreign universities and scientific centers. It is a regional leader concerning participation in the program “TEMPUS/TACIS” under the aegis of the European Union. Total grant help to DNU from the beginning of the participation in this program (1994) is over 2 mln USA dollars. Thus, in 2004 in DNU successfully finished the project “International relationships and European studios: a new educational program and specialties”, the result of which is the opening of a new specialty “International relationships”. In 2005 new TEMPUS project started “Systematic modernization of the university management” and “Departments modernization of the international relationships”. Members of consortium (besides DNU) are University of Cordoba (Spain), University of Applied Science (Germany), Kyiv International University, Zaporizhzhia National Engineering Academy, Odessa National Economic University, Ministry of education and science of Ukraine.

Dnipro National University is the member of the Magna Charta of the European universities (Magna Charta Observatory) of the Eurasian association of the universities which unites 69 leading educational establishments of CIS countries and the Baltic states. There is an intensive exchange of students, scientists and teachers in accordance with the directions of the university work and its foreign establishments-partners. Over 100 teachers and colleagues of scientific-research part are in the business foreign trips every year. Approximately 30 foreign lecturers and scientists take part in the educational process of the University every year.

During only 2004-2008 over 60 delegations visited DNU, particularly, from Shandun Textile Institute (Veifan, China), Middle Eastern Technical University (Ankara, Turkey), Appararus USA Congress at the head of Jerry Vans, a group of consultants of Eurocomission at the head of Loren Drotti, the ambassador of France in Ukraine Jean-Pol Vesian and others.

A scientific library of the University is one of the biggest among the libraries of Prydniprovia educational establishments. There are over 2 mln copies in its funds, 1 mln 400000 of which is scientific publications from different areas of knowledge, 460000 copies are educational methodological literature, 165000 – belles-lettres, 300000 – periodical publications, over 100000 – foreign publications. 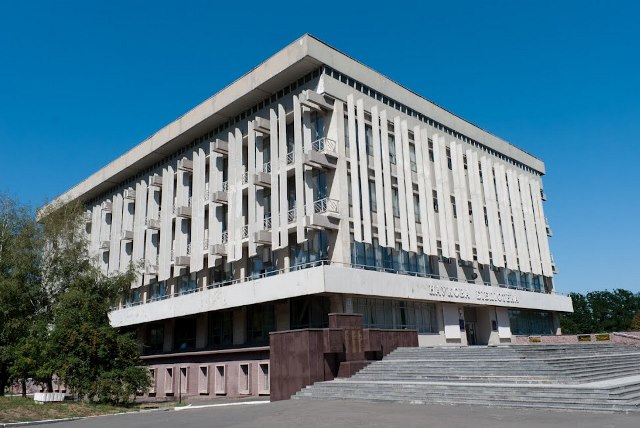 The pearl of the University is a palace of students, which is appointed to be historical-architectonical monument of the national significance by the decree of the government. 24 collectives of amateur art activities work at the Palace of students of the university, 13 of them have honorary titles “National” or “Exemplary”.

The University has a modern sport base – a stadium, sport areas, a Palace of sport, where 7 sports halls are, a swimming-pool 25x50 m, a swimming-pool for children, a hall for fencing, there also work sections of 15 kinds of sports.

There is a trade union at the University. It promotes solving different questions of students’ life, organization of cultural-mass measures, social protection and students’ health improvement. Students are given the opportunity to receive the treatment in sanatorium-preventorium of DNU, to take part in a work of the University through the trade union organization.

A sport-health camp “Sosnovyi Bir”, which is situated in one of the most picturesque parts of Dnipro city, can simultaneously receive 240 campers. Approximately 800 people rest in a sport-health camp of the University every year. 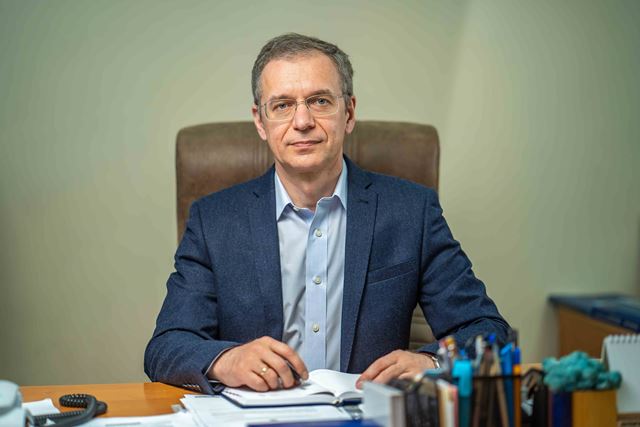 DNU rector Okovytyy Sergiy Ivanovich, doctor of Chemistry, professor, Merited Scientist and Technologist of Ukraine, Distinguished Teaching Award Winner, born in 1970.After graduation from Chemical Faculty at Dnipropetrovsk State University in 1993 worked at the Department of Organic Chemistry as an assistant (1993 – 1996), senior teacher (1996 – 1997), associate professor (1997 – 2004), head of the department (2004 – 2017) and professor (2017 – currently).

Author (co-author) of 370 scientific and scientific-methodic papers, in particular 5 books and 102 papers including 56 papers published in international editions with high impact-factor and refereed by Scopus and Web of Science. H-index equals 12 and 13 accordingly.